Flempton is a typical breckland village with many flint-clad houses, near to the River Lark. It was recorded in Domesday as "Flemingtuna". The name apparently refers to Flemings who settled here a long time ago, perhaps because William the Conqueror gave land here to Flemish mercenaries who had fought for him.

There are Bronze Age barrows to the west of the village and just to the north is West Stow, with its country park and Anglo-Saxon museum & recreation village.

The village was home to the (now defunct) East of England Regional Assembly and is said to be the geographical centre of East Anglia. 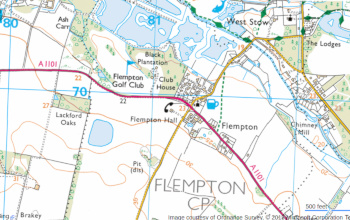 The 1844 White's Directory lists George Frost as a beer seller: the Greyhound?

The 1874 White's Directory lists Mrs Eliza Frost as a beer retailer: the Greyhound?

The 1891-92 White's Directory lists Mrs Eliza Frost as a beer house keeper (also listed as a brewer): the Greyhound?