The first tranche of pubs (those able to serve outdoors) have now reopened. The rest of our pubs will be permitted to reopen from May 17th.

5 Establishment(s) understood to have reopened.

5 Establishment(s) understood to have reopened.

Please tell us if you know of any pubs ready to reopen when outdoors service is permitted that we don't list here.

Aldeburgh is an attractive coastal town which may have origins as a Roman port; it was recorded in Domesday as "Aldeburc". Several working fishing boats can still be found on the beach together with the local RNLI facility.

The Tudor moot hall (now a museum) once stood in the middle of the town and not close to the seafront as it does today, which demonstrates how much of this town has been lost to the North Sea.

Newson Garrett was the developer of nearby Snape Maltings and he settled in the town during the 1840s. His daughter, Elizabeth Garrett-Anderson became the first woman to qualify as a doctor in the England (as a woman[1]) and later became the first female mayor in the country by holding the office in Aldeburgh in 1908. Benjamin Britain and Peter Pears are both buried in the town and together they helped to establish the now internationally renowned Aldeburgh Festival. Noted poet George Crabbe was born here in 1754; he wrote of the town's depression during that time.

Aldeburgh Museum is housed in the Moot Hall, on the seafront.

Crag Path, along the beach, gets its name because it was made with soft coral crag which was dug from nearby pits.… 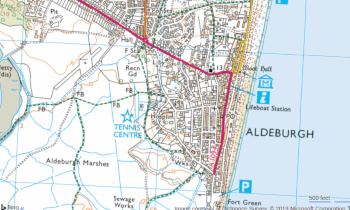 According to A Survey of Suffolk Parish History, two brewers were recorded in the town between 1550 and 1599.

A hotel called the Commercial Inn was believed to have been visited by Charles II in July, 1668 on his way to Ipswich, having landed in Aldeburgh Bay (in the book "Inns of the Suffolk Coast" by Leonard P Thompson** this was believed to have been the New inn?? this seems unlikely as the New inn was built much later - but could it relate to an earlier building on the same or a nearby site?)