Now by-passed, this linear settlement has many fine 16th and 17th century buildings. The village consists of two contiguous parishes - Inferior and Superior - whose borders follow the course of an underground stream, crosses the street and runs through many houses and at one time through the bar of the fomer Hamblyn House (now a private residence). The village of Botesdale adjoins at the eastern end. The whole area has been designated a conservation area with several thatched houses. Basil Brown, the archaeologist responsible for the discovery of Sutton Hoo lived here for a while. A colony of large, edible snails still exist locally and may be descendants of those once imported by the Romans, of whom some archaeological evidence has been found.

Unusually, the two Rickinghalls' signs are on either side of the same sign-board, which stands close to Inferior's church.

Evidence of Iron Age occupation has been found in the area of Briar Lane. 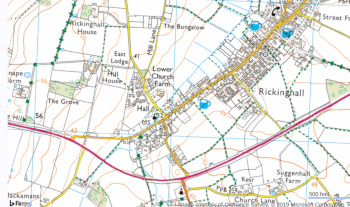