Blundeston is a large village recorded in Domesday as "Dunestuna" and dominated by the tallest church tower in East Anglia. It appears on John Speed's 1610 map as "Blunſton". Blundeston Lodge was said to have inspired the poet Gray to write his Elegy but the house was demolished in the 1960s to make way for a maximum security prison, which closed early in 2014.

The parish also features in Dickens as "Blunderstone", birthplace of David Copperfield; the village sign shows the young David looking at the village church. Part of the story takes place at the Plough.

A house in The Street incorporates the remains of a tower mill that stood here since about 1820, which worked until 1923.

The village pound (appropriately on Pound Lane) still stands, and was restored in 1959:

The pound was an important part of Blundeston life. When livestock was moved from one pasture to another, or to market, it was done "on the hoof". Sometimes a few would go astray and these would be impounded here. The were looked after by the pinder, who fed & watered them. A fee had to be paid on collection by the owner.

This is the only property The Lord of the Manor still retains in the village.sign on the pound 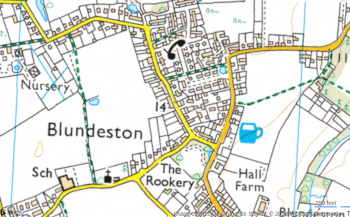