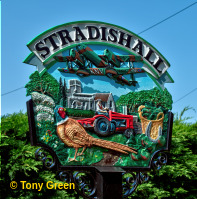 The parish's south facing slopes make it an ideal place to grow fruit and there are many local orchards. Today the most prominent local feature is HighPoint Prison (since 1975). Prior to being a prison the former RAF site was used as a transit camp for Ugandan Asian refugees. Two former local residents, John & Henry David were burnt for their protestant beliefs just two weeks before Queen Mary died. The village was recorded in Domesday as "Stratesella" and appears on John Speed's 1610 map as "Stradiſhill".

Work started in building RAF Stradishall (actually in Hundon) in 1935 and it opened in Feb 1938 with Handley Page Heyfords (the last bi-plane bombers to be used by the RAF). An Empire Day open day was held here in 1939 when 75th Squadron was equipped with Wellingtons. Soon after 236th and 254th fighter squadrons with Blenheims were based here for a short while until 214th Squadron arrived. With their Wellington bombers they were to stay until upgrading to Stirlings in spring 1942. Other Squadrons included 419th Flight which was created to support SOE operations using Lysanders and Whitleys…

The Black Horse, Farley Green, is listed in Wickhambrook.

Some details from "Suffolk Airfields in WW2" by Graham Smith.