The address of this page (and the entire website) has changed and the old address will soon cease to exist. Please adjust your bookmarks accordingly. 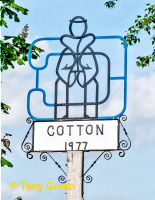 Cotton is a parish containing several moated farms. One of these, Cotton Lodge, was reputedly used by some of the conspirators in the Gunpowder Plot. The Mechanical Music Museum houses a collection of music boxes, gramophones, organs etc and is open Sundays from June to September.

The old railway station which can still be seen alongside the line at the Station Road bridge, was Finningham station. It actually stands in Bacton, but to complete the confusion, the Railway Tavern was in Cotton. During the construction of the railway in 1849, an Anglo-Saxon cremation cemetery was found in a ballast pit.