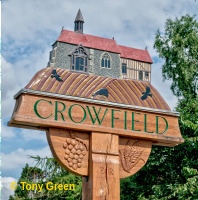 Crowfield is a mainly linear village, with most of the homes spread along the Roman Stone Street, which connects Coddenham to Peasenhall. It was recorded in Domesday as "Crofelda".

The church, which is some distance from the main village, features the only half-timbered chancel in Suffolk.

A small smock mill, previously used as a drainage mill near Great Yarmouth, was moved to Crowfield in about 1840 and converted to a grain mill. In 1916, the cap was blown off; it continued to work with an engine until about 1935.

The village's most famous resident is Roy Hudd, who uses his influence to ensure the annual village fête always has someone well-known to open it. 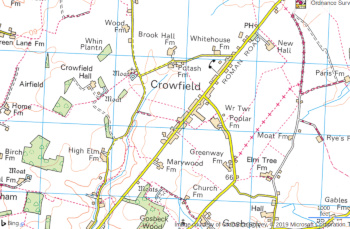 In the 1844 White's Directory Robert Lockwood is listed as a beer house keeper & maltster.

In the 1855 White's Directory Robert Richardson is listed as a beer house keeper.

In the 1861 census Robert Richardson/67y/Innkeeper/Blaxhall (pub not named).