The majority of pubs have now reopened after the latest lockdown, albeit still with restrictions. Many pubs currently have temporary trading hours; these are shown where known. We also show pubs we know have still not reopened as temporarily closed.

Please note that due to the pandemic currently being allowed to run out of control, many pubs are having to close temporarily due to staff or customers getting "pinged". Please check with the pubs if you plan to travel any distance.

A former coaching inn and posting house whose core was built in the late 15th century. The remaining façade dates from the late 18th century. It is now occupied by a row of shops.

According to A Survey of Suffolk Parish History, the White Hart was recorded in churchwarden's accounts for 1652/3. 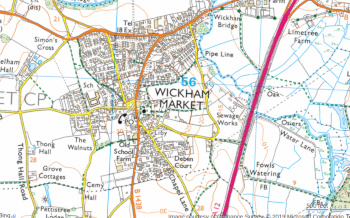 A reference appears in the Ipswich Journal, December 13th 1746*** to the White Hart, Wickham Market

The White Hart was a commercial hotel and Posting House

Wanted in an Inn, a plain cook…