Update: pubs which are known to have reopened are now also listed. Please let Tony know if you know of pubs not listed that have reopened.

According to Alfred Hedges' 1976 book, "Inns and Inn Signs of Norfolk and Suffolk", the Spread Eagle was the sign of Catherine of Aragon.

This is now part of Eagle Court. I lived there with my parents (Marjorie and James(Jim) Smedley) from 1962 to 1972. There was one more landlord after mum and dad left then it closed around a few yeas later.From Annette Day, nee Smedley

The building dates from the 18th century, with 19th century alterations.

It's shown (though not named) as a hotel on this old OS map from about the end of the 19th century. interactive map 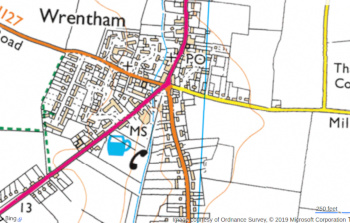 Lucy Fiske, of the Eagle Inn, Wrentham, applied for an extension in time to 11pm on Wednesday 6th January 1875, on the occasion of a rent audit, which the Bench granted.Ipswich Journal, January 1875**

In 1900 a description of the pub said, "visitors requiring country rest with sea air, will find every accommodation at the above hotel; trains met at Southwold or Lowestoft station by appointment".

It was the home of the Manchester Unity of Oddfellows in 1916.

The spread eagle was originally a Roman sign and later used by many countries including Austria, Germany, Russia, Spain & France. The sign is also used by many English noble families.