Gerald Balls was in the 1881 census as the publican. Identified with his family including his father George Balls, who is a direct descendent of mine, my great-great-great-grandfather.
Who was born at Midfield and was first recorded as living at Bungay from 1841 census he was a millwright.(information from John Ranson) 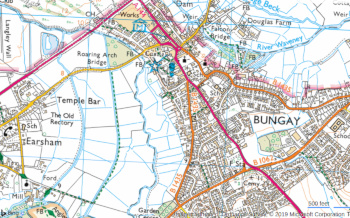 James Low of St Andrews was found guilty of stealing a glass tumbler, the property of Mr Driver, landlord of the Prince of Wales Inn, Bungay. Driver stated that he suffered greatly at fairs, and similar gatherings, from losing glasses, having lost as many as 20 in one day. Low admitted the offence and was sentenced to 21 days' hard labour.Ipswich Journal, October 1855**

The sixth anniversary dinner of the Court of Forrester’s Pride, No. 3102, was held at the Club Room at the Prince of Wales Inn, Bungay, where about fifty members and friends adjourned to the dining room, where a very substantial dinner was provided by the host Brother Hardingham…