It's shown here on an old OS map from about the end of the 19th century. interactive map

The Ship is also reported as being in Bridge Street.

I was stationed with the USAF at RAF Mildenhall twice (1966-1969 & 1987-1991). I played darts for the Ship's team in 1966. Mrs Williams was the operator and had a little guy named Cyril who worked for her. Cyril knocked her stone wall over once with her car. It just fell over all in one piece and was stood right back up, amazing. She was a great lady. She used to loan us ten shillings each on the nights before payday and we would drink beer and play darts in the room in the back just off the bar, with a coal burning fireplace… 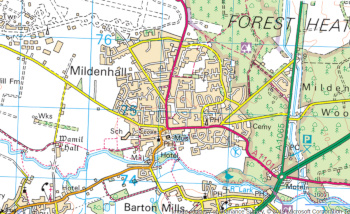 The Ship Inn, Mildenhall - Sale of Mr FINHAM's Valuable Plant of Brewing Utensils, as he is retiring from the business.Ipswich Journal, April 13th 1814**

The death of Henry Clarke, landlord of the Ship Inn, Mildenhall was announced on the 4th March 1860, he was aged 57 years.Ipswich Journal, March 1860***