The King's Arms stood roughly where the current Thornton's and Argos stores are.

It was used as a staging post for coaches in the early 19th century. It was closed for conversion into retail premises (later William Turners drapery shop).

The King's Arms was described by Hollingsworth in his History of Stowmarket as an "old sign made new" ie reuse of a sign probably banned during the Commonwealth era. It was later owned by William Goodwin and son (brass founders) from 1717 to 1747. Maltings and stabling was also located on the same site at this time. Later owners included Leonard & Shadrack Munnings (1748-92) and John Boby (1792-1817). Thomas Sheldrake subsequently owned the inn from 1818 until 1846.

The building was demolished in 1970. 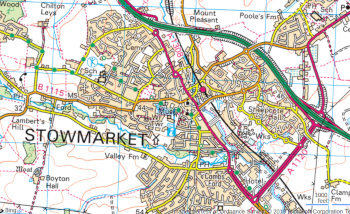