The Green Man is said to have been open in the 1920s, though we're not sure for how long. The pub had a long association with smugglers, who would bring their booty up the river Deben as far as Debenham and then take it cross-country to here. The building in our photographs and on our map is identified as the former Green Man in the Listed Buildings Register.

The building is a 16th century former farmhouse. 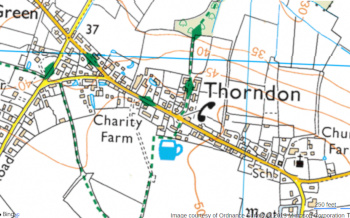 A Green Man is a sculpture, drawing, or other representation of a face surrounded by or made from leaves. Also frequently found on carvings in churches and other buildings (both secular and ecclesiastical).