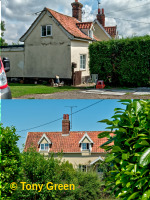 This is long since closed and was left derelict for many years. It's now believed to have been converted to residential use.

According to A Survey of Suffolk Parish History it was open between the 17th and 19th centuries; beer was apparently drunk on the opposite side of the road to the beerhouse. This source tells us it was two small cottages in 1981, though it isn't clear if one of these cottages was the beerhouse or if they were built on its site.

It's not listed in Victorian Trade directories.

Please contact us if you have more information about this pub.

Listed as Bottle & Glass, Campsey Ash Road in the 1871 and 1881 censuses. Two households are listed in 1871 and three in 1881, none of whom are shown as publicans. (First entries only in each case have been listed in publicans/residents section.)