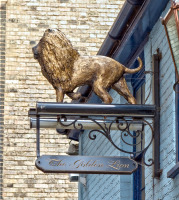 also traded as as: White Lion

A Grade 2 listed hotel building and former posting house, located in one corner of the historic Cornhill. Once it stood beside the moot hall, today it is dwarfed by the Victorian Town Hall.

Originally the whole hotel complex formed the Golden Lion as the large roof sign suggests. The lion statue was once gilded; small remnants of this gilding still remain. Since 1998 the foyer has been used as a restaurant and the separate function room (to the rear) has been used as an occasional live music venue, whilst the hotel business still functions on the upper floors. The pub had a toilet for disabled customers.

The bar area was operated as a single "L" shaped split level room with food and beer festivals. Beers were from the JD Wetherspoon national beer list. Disabled toilet.

Around the turn of the century, before Wetherspoon's took over, it traded as the Vaults Bar (as part of the hotel) and had a reputation as a first-rate freehouse with a wide range of well-kept beers.

The building is supposed to date from the 18th century. An earlier inn called the White Lion stood on this site; whether in the same building or one preceding it is uncertain.

The White Lion is known to have dated back at least to the 16th century.

The hotel is shown (though not named) on this old OS map from about the end of the 19th century. larger map

[1] The Moot Hall stood on the site of the present Town Hall.

[2] In the time of Queen Mary the Ipswich Martyrs were burnt at the stake on the Cornhill (in 1555) for their Protestant beliefs. A monument commemorating this event now stands in Christchurch Park.