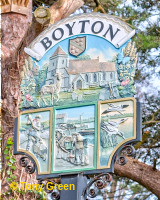 The village, recorded in Domesday as "Bohtuna", overlooks the coastal marshes. In the 18th century it had strong seafaring connections and a small jetty can still be seen on the Butley river. Grazing marshes below Dock farm are run as a nature reserve by the RSPB.

A fine block of Alms houses (dating from 1736) were funded by Mary Warner's Charity for 6 poor men and 6 poor women - and whose book of rules included (penalties?) "for strolling to the Bawdsey Star and tippling" - the book is now kept in the church.

Clay quarried at Boyton was of very high quality; large quantities were shipped from Boyton Dock to the Netherlands where it was highly-prized for making Delft pottery.